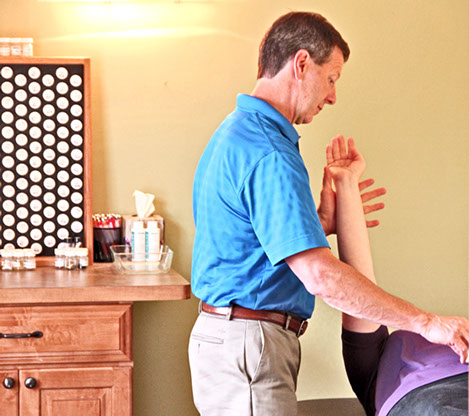 There’s a new health care destination in Minnesota. Eighty miles north of the Mayo Clinic, and smaller by roughly 32,000 staff, the MetroEast Wellness Center doesn’t hook people up to multi-million-dollar machines. They just get their patients well—and the news is spreading.

“We’ve been discovered,” says clinic director Marty Furlong, DC. “For my first twenty-three years in practice, my client base never extended beyond the suburbs of Minneapolis-St. Paul. I am now receiving patients from the upper Midwest states, and referrals from all over the country.”

The change started four years ago, when Dr. Furlong began incorporating Nutrition Response TestingSM methodology into office visits where indicated. This is the most advanced system of chiropractic nutrition, because it alone assesses the functional status of the autonomic nervous system directly.

He didn’t promote for new nutrition patients. He simply began solving his most difficult chiropractic cases—the ones with chronic, recurring musculoskeletal complaints.

“Doug had been coming to me since 1986 to handle hip, shoulder and back pain resulting from hard physical labor. In 2009, I told him, ‘Let’s add a nutrition component to your treatment.’ I tested him and gave him a nutrition program, which he followed concurrent with the adjustments. His urinary incontinence cleared up immediately. This problem had caused him plenty of embarrassment at work, but he never mentioned it to me until it was gone. Now he just comes in for monthly checkups—and reports no hip, shoulder or back pain.”

Doug’s daughter got a big improvement in her acne condition. His 84-year-old father, also a nutrition patient, recently reported his best golf score in a decade. Why? “I don’t fall over when I lean over the ball, because my feet aren’t numb.”

In March 2012, Doug referred a friend who sells high-end RVs. She had multiple immune challenges and extreme abdominal pain that had on occasion forced her to cut short her sales talks. She complained of a severe skin rash, lightheadedness, frontal headaches, and dry mouth; she had to carry a water bottle and take sips during presentations.

This poor woman had been to the Mayo Clinic and other specialists with no results. She’d never been to a natural practitioner and was a little hesitant, but she followed the program—all the while consulting her Mayo doctors for checkups and blood work. One year later she reported, “No complaints at this time!” She referred her parents, who have also become nutrition patients.

A 76-year-old patient referred her massage therapist, starting another referral snowball that expanded 150 miles north of the practice and 70 miles south.

Most of the nationwide referrals come from Nutrition Response Testing patients who have friends or relatives in the upper Midwest states. Their local practitioner refers them to the Ulan Nutritional Systems website, where they simply click the “Find a Clinician” button and fill in a form. The friend’s or relative’s contact information is relayed by the UNS team to the nearest qualified practitioner.

“If they are under the care of another healthcare practitioner, I encourage them to continue that relationship,” Dr. Furlong says. “I also introduce chiropractors in my area to Nutrition Response Testing via the UNS-sponsored Study Groups which I lead in my office every other month. They try it out and have wins on the easier cases. The tough ones, they refer to me. And that’s a great referral.” These Study Groups are free, and you can sign up here.

The practice reports a 100% collection rate for nutrition visits.

“Many patients look to our clinic first for all their health needs instead of seeing us as merely a back pain or headache pain clinic,” concludes Dr. Furlong. “Now that I’m using the complete science of chiropractic, including state-of-the-art nutritional support, my reputation as a healer has grown beyond all expectations.”