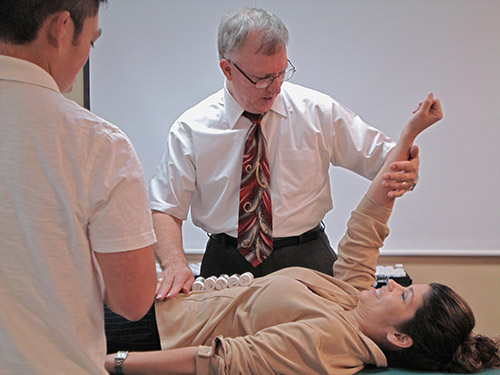 ACN: Dr. Brad, we’ve been seeing a lot of success stories about women who couldn’t get pregnant before Nutrition Response Testing and went on to conceive healthy children within a few months of starting a program. Do you have clinical experience with that?

Brad: Fertility is one of the routine challenges of women in my clinical experience. Typically, because the woman is eating sugar, she has a general inflammation throughout the body, which then generates abnormal hormonal function. The pancreas does abnormal things with insulin, which triggers abnormalities in other hormones, which makes it difficult to get pregnant.

The other common issue is, because of toxic exposures, the uterus and ovaries become a toxic waste dump for metals and chemicals, which then generate immune challenges. The tissues are dying and the “bugs” come in to do their normal job of cleaning house. And then the bugs get blamed for the illness, which is nonsense. We don’t kill bugs, we give the body the proper nutritional support so that it can heal itself.

ACN: What is the reproductive system doing when it shuts down like that? Is it just protecting the body?

Brad: Genetically, the body knows when it’s not safe to grow a baby. That seems to be what Innate Intelligence is telling the parent. So it shuts down the ovaries. If it’s got metals or chemicals in it, the baby sometimes will start but it will spontaneously abort early in the pregnancy. Or it will shut down the hormone system in the first place so there is no menstrual cycle. That’s a common occurrence these days: “I haven’t had a period in six years.”

ACN: How do you determine what barriers to healing are present in a person’s body?

Brad: Dr. Freddie Ulan identified five particular barriers to healing, which he called stressors. He developed the “Five Stressors Test Kit,” which is one of our tools, as well as the standard thirteen steps of a complete Nutrition Response Testing analysis. Sugar is in the category of “food sensitivities,” which is one of the five stressors.

ACN: Sugar was a culprit in Pottenger’s cat studies as well.

Brad: Right. Dr. Francis M. Pottenger, Jr.’s study of 900 cats was done in the 1930s. One of the test groups got sweetened condensed milk, which is obviously not part of a cat’s natural diet. Many of the cats in that group couldn’t procreate after three generations. Of course there is much more to this study, but ultimately it showed that bad diet causes genetic changes and many serious physiological dysfunctions.

ACN: You’re talking about the recent science of epigenetics?

Brad: It’s not so new. Drs. Weston A. Price, Francis Pottenger, Melvin Page, and Royal Lee all wrote about the impact of diet on genetics. It’s finally getting some press, partly because the Mayo Clinic newsletter legitimized the idea.

ACN: I found a book called Pottenger’s Prophecy that goes into more recent epigenetics research. The authors say you can have healthy descendants two or three generations from now if you straighten out the diet today. But I was getting the idea that it takes just a few months to for the body to normalize its physiological functions using Nutrition Response Testing and proper supplementation. Which is correct?

ACN: We get recoveries, though, in a few months in some of these cases.

Brad: Their bodies start creating an environment that is conducive to fertility. We get them to stop eating sugar, and put them on a good, standard Nutrition Response Testing “designed clinical nutrition” program of whole food supplementation.  Next thing you know, they’re having kids.

ACN: So they are able to have children. Do the children still have issues from the bad diet of their moms?

Brad: The children will definitely have issues, but the good news is with good nutrition they don’t have as many issues, they are not as severe, and they get over them quicker.

ACN: So they are able to have children, but the children are still going to have issues.

Brad: The children will definitely have issues, but the good news is with good nutrition they don’t have as many issues, they are not as severe, and they get over them quicker.

ACN: How does this information help chiropractors?

Brad: Chiropractors for years have worked to help females get pregnant. But my generation of chiropractors weren’t faced with a population of nearly 100% “third generation Pottenger’s cats.” Nutrition Response Testing enables chiropractors to fulfill their destiny as laid out by D. D. Palmer. We have spinal manipulation and advanced chiropractic nutrition working together.

My younger colleagues aren’t even trained to think of themselves as healers. But by consulting the Innate Intelligence of the body, and giving it the nutritional building blocks it needs, they can get wonderful results.

Epigenetics—the study of the chemical modification of specific genes or gene-associated proteins of an organism. —Encyclopedia Britannica