Getting Results with Recurring Subluxation Cases 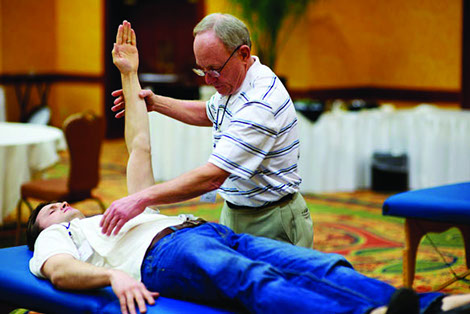 Do you find yourself correcting the same subluxations up to three times a week on some patients? Chronically recurring subluxation is caused by an organ (or organs) with an energy problem. This is called a “viscero-somatic reflex.” That energy problem is the result of poor nutrition and toxins, which have compromised the structural integrity of the organ.

With Nutrition Response Testing, we now have the tools to find out which organ is being affected, determine the exact deficiency or imbalance, and correct it with precisely targeted clinical nutrition. The result is corrective spinal adjustments that really hold.

Nutrition Response Testing practitioner Randy Mantz, DC of Reno, Nevada, tells of a male 77-year old patient who had been suffering from on-and-off lower back pain in his sacroiliac joint six to twelve months before coming into his office. As he says:

“I told him I didn’t think the adjustments were working, and I encouraged him to do some nutritional testing with me. He was very skeptical.

“I found his prostate was being aggravated. I gave him a few supplements, and he came back five days later and his back pain was gone.”

The Nutrition Response Testing procedure first assesses the status of the autonomic nervous system through a set of simple—yet elegant—procedures, and then determines the appropriate nutritional and dietary support in conjunction with the correct chiropractic intervention. Melissa Brennan, DC, from Rochester, MN, treated a female patient who had lower back pain along with a shooting leg pain every day for over a year, difficulties that responded poorly to chiropractic adjustments alone. Being an expert in the use of Nutrition Response Testing, Dr. Brennan knew what to do:

“I tested her and found out that her digestive system was stressed and that she was sensitive to dairy. We pulled dairy out of her diet, and literally within a few weeks, her back pain and shooting leg pain were gone! If we hadn’t found what was stressing her digestive system she wouldn’t have gotten better.”

To achieve successes like these, training in Nutrition Response Testing is required. The curriculum is accessible to any qualified health practitioner whose scope of practice includes nutritional support for patients. Using this system, you can discover what nutrient building blocks are missing, in what quantity, and their priority. As your patients’ bodies regain their nutritional integrity, adjustments start holding, and full healing is attainable.

“What I find with each patient is that they tend to hold their adjustments better. So now they actually feel better. I feel more empowered by the fact that they actually are living a healthier lifestyle and able to do the things they want. So I am becoming known as a healer, as I am doing the things that help my patients and giving them the very best care.”

By attending Nutrition Response Testing seminars and workshops, studying Dr. Ulan’s DVD’s, and dedicating yourself to achieving this high level of professionalism, you too can truly become known as a healer, resulting in the practice expansion that brings your goals within reach.